Valitox : an alternative to animal experiments

All have provided financial support for this project led by Pro Anima. Many organizations support Valitox through their communications.

based on the scientific expertise of Professor Jean-Francois Narbonne and the technical management of Chrisophe Furger, researcher in cellular biology

Valitox is a new toxicity test based on human tissue culture. It relies on light emission (fluorescence) to measure degrees of cellular change resulting from the presence of toxic agents or agents believed to be toxic. It works for all types of cell, and at a high rate of output, making the cost of the test highly competitive.

The predictive accuracy of the Valitox test for acute toxicity in humans is 72%, compared with 65% or 61% for mouse or rat based tests respectively.

Because the test is based on the process of cellular decay, it can be applied to both acute and chronic toxicities.

Valitox can replace the DL50 and CL50 tests, used in toxicology and ecotoxicology, with respect to pharmaceutical, cosmetic, alimentary, agrochemical and chemical substances.

Valitox is especially relevant with respect to the REACH (Registration, Evaluation, Authorisation of Chemicals) European Directive : 140,000 substances are due to be tested between 2013 and 2018. Using the normal protocols millions of animals would be sacrificed.

Created in 1989, with Theodore Monod as its president, Pro Anima is a scientific committee formed around a community of volunteer university researchers and doctors.

Despite considerable investment in research, the major pathologies of cancer and neurological diseases (Alzheimers, Parkinsons, MS) continue to take their toll.

Pro Anima has identified over-reliance on animal testing as a major contributing factor in the shortcomings of our public health system. In particular Pro Anima supports the rigorous contention that no species can serve as the biological model for another ; each species is defined by its reproductive independence. In the light of this fact animal experimentation is not only useless, but also hazardous to mankind, leading each year to numerous premature deaths.

Pro Anima collects and promotes viable modern biological techniques, both speedy and economical, above all those aimed at the evaluation of the phyto-sanitary and industrial products that surround us in everyday life (pesticides, supplements, colourings, preservatives, food additives …)

Pro Anima organizes and participates in international conferences and debates to promote advances in research and to provide a popular fund-raising platform dedicated to animal-free research.

The ETHICSCIENCE committee, with president Jean-Francois Narbonne, and with many eminent personalities, has chosen several promising research programmes to support with funding, including one for lung cancer.

To support us in our fight for ethical scientific research, respectful of all living creatures and assuring our healthy future, please subscribe at : 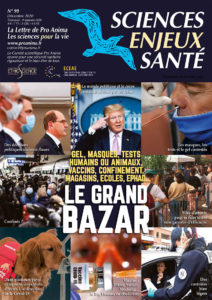