Trade in primates at Niederhausbergen (University of Strasbourg)

We want to bring you up to date on our dossier about the trade in primates run by the University of Strasbourg (via their Centre at Niederhausbergen), where primates bought for 10€ a kilo are sold on at 5000€ an animal to European laboratories.

In July 2015, Dr Anne Vonesch, vice-president of Alsace Nature and member of the European Bureau of the Environment, invited Sylvia Hecker of Pro Anima’s scientific committee, to undertake an in-depth investigation into this trade. Since that time, an enormous amount of work has been done to bring about the demise of this sordid business.

A highly motivated group of investigators

Many organisations were quick to join Pro Anima, building. In the first instance Pro Anima collaborated with Animalsace, whose ex-president Cyril Ernst remains our partner for the legal aspects of the case.

Later we were joined by Code Animal, Fight for Monkeys, International Campaigns, Animal testing, 269Life, Animalise (student union of the University of Strasbourg), as well as with Soko Tierschutz (in particular about the American platform Covance and its client laboratories — including LPT -, which the association was able to close down in 2020 thanks to several important events that brought together up to 15,000 people).

We should also mention Artze gegen Tierversuche that sent, each year during the organized protests, a delegation of doctors, members of the association ; RAO Reporters (Reporters for Animals Only), Antidote Europe and many other groups.

Roughly ten of our scientific sources are located in Strasbourg, including national and European elected officials, members of the Council of UNISTRA including a senior legal manager who also occupies an important public position in the European administration ; the national police and the security services as well as the police station of Mundolsheim which is also responsible for Niederhausbergen. We should also mention the support we receive from local personalities including Matthieu Ricard, Aymeric Caron and many others.

Pro Anima is also in touch with local and national media (including ‘M’ magazine of Le Monde), and with German media.

Finally, we work with our legal team, specialists in environmental and public law : the office of Huglo-Lepage, which takes on only high-profile dossiers of public interest (Corinne Lepage, a European ex-minister of environment, is also a lawyer). Having the support of this office provides us with a major opportunity to achieve our objectives.

All these people have confidence in our mission and are working closely with us to achieve it.

Thus, and since 2015, events and protests have been organized every year.

Last year, on the initiative and with the determination of Alexandra Justamente — Fight for Monkeys, and due to sanitary restrictions, we co-organized, also with RAO Reporters, Europe’s 1st Virtual protest “Justice for Monkeys”.

Our first petition, launched on-line in November 2014 with Animalsace, against the breeding of primates at Niederhausbergen, was signed by more than 144,000 people on line, and by 8800 in paper of whom 80 were scientists. A second petition for the closure of the centre, launched in 2019 with Animalise and Antidote Europe, attracted more than 70,000 signatures. A number of mail shots have also been sent out to embassies and public bodies.

Several meetings were held with the services of the prefecture.

Perhaps and most significantly in 2019 the turnover of the University of Strasbourg from animal trading dropped by 50%.

An appeal has been lodged with the Strasbourg Commercial Tribunal against the renewal of the licence of the Niederhausbergen Centre of Primatology. To allow a calm atmosphere for judicial debate, we have suspended public demonstrations for the time being.

Pro Anima, with Sylvia Hecker, has represented the core of this campaign since 2015. However, we welcome support from all who support the communal good and in particular, the fate of our close cousins, the primates of Niederhausbergen.

Our aims at once ethical, scientific and ecological

We must continue to denounce the cruelties carried out on these primates ; but also to dismantle the front companies, conflicts of interest and influence peddling that go with this traffic. We must show that we can do better.

So, with the help of our lawyers, we hope to be able to close the Niederhausbergen Centre for Primatology, and to stop this shameful traffic.

In the meantime, if not already done, make your voice heard and sign the petition to end this trade in primates. 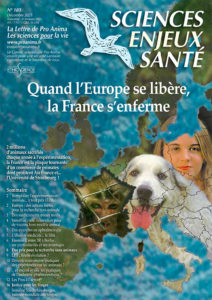